This episode focuses on Tyler Down as the main suspect in Bryce Walker's murder.

After Tyler admits he still has a gun, the group keeps tabs on him at school. But their worry deepens after learning that he had a motive to kill Bryce.

This episode focuses on Tyler and his gun. We find out that Tyler kept the gun not for murder, but rather because he planned on using it to kill himself. In the end, Tyler couldn’t pull the trigger. He decides instead to try and get closure from Monty. Tyler demands an apology, but Monty tells him to get over it and that nothing happens without Bryce saying so.

Meanwhile, Clay has been worried about the fact that not turning Tyler into the police means that Clay himself could be responsible for Bryce's murder, assuming Tyler did it. He, Ani, Justin, Jessica, and the rest of the gang agree to keep an even closer eye on Tyler now that the gun is around. When Clay sees a brown paper bag in Tyler’s backpack, he freaks out. Tyler can tell that Clay is slowly stopping to trust him and he gets worried.

In a flashback, we see Jessica and Tyler at the Crestmont movie theater, where Jess works. Tyler would stay here so Jessica could watch him during her "shift", but he would creep her out with intense stares so Alex would normally come to take over her shift.

One day, during Jessica’s shift, she has a club meeting with her new club, Hands Off Our Bodies. The club's goal is to break apart the toxic culture at Liberty High School. The club also supports survivors of sexual assault. Tyler joins as an ally of the club, although he doesn't tell others about his history with sexual assault.

Clay goes over to Tyler’s house to look for the gun. While looking, Clay finds photos of Bryce’s dead body on Tyler’s laptop. Tyler quickly explains that it’s not what it looks like. Tyler just found Bryce in the river that way, and placed an anonymous call to the police. The reason why he was at the river in the first place was that Tyler wanted to end his life. Then, when he saw Bryce’s dead body, he realized he didn't want to die. He wanted to live, and he wanted to get better. Tyler thanks Clay for giving him a chance to do that.

Tyler shows Clay what was actually in his backpack - a camera, just like the one from Rear Window, a film that Tyler, Ani, and Clay saw together. Tyler remembered that Clay thought that the camera in the movie was really cool.

In another flashback, the episode focuses on Clay and Ani and their relationship. Clay gave Ani his old bike so she doesn't have to walk home at night, which she loved so much she cried.

At the end of the episode, Justin insists that he will get rid of Tyler’s gun. Instead of throwing it away, he uses it to threaten Seth, his former stepdad, after giving money to leave him alone. Seth tells him that if he shoots, it will be all over.

We find out later that Bryce wasn't shot, but he was beaten to death. The police start looking for a murder weapon, which they think is in the river where Bryce’s body was found. The river happens to be where Tony and Clay threw out Tyler’s other guns.

The police also found vials of an unknown liquid in Bryce's car. Upon learning this information, Alex starts freaking out.

Lainie: " Do the flowers make it seem like we're trying too hard?"
Matt: " A little, are we flower people? I feel like we're not flower people. We should just be us. "
―  Matt and Lainie preparing for the social worker home visit

Clay: "So, I stepped in front of him."
Ani: "In front of his gun?"
Clay: "And I asked him not to do it."
Ani: "Clay, that is insane."
Clay: "Yes, it was a really bad choice. That I think I'd make again. Exactly the same way."
Ani: "You're a madman."
Clay: "I get it, you think it was wrong."
Ani: "I think it was stupid. And brave. But it doesn't mean you have to be the hero all the time."
Clay: "It kind of does, though. Until we know he's okay."
Ani: "You've got to put on your own mask first. When a plane loses pressure and there's no oxygen, you've got to put on your own mask first."
―  Clay telling Ani about stopping Tyler from shooting up the school

Tony: "Do you remember what was going in your head that night outside the gym?"
Tyler: "I don't."
Tony: "Do you remember the feeling? Before. I mean, what got you there. It's anger. It's hurt. It's...rage. Whatever, right? It's all up here, and it's not gonna go away. I know 'cause I got it too."
Tyler: "You do?"
Tony: "Of course I fucking do. And I'm telling you, you can let it run you, or you can...you can grab hold of it. You can own it. Channel it. You got all this shit inside your head that you can't, you can't say, right?"
Tyler: "Yeah, there's a lot of it."
Tony: "Show me."
―  Tony teaches Tyler how to channel his anger into boxing

Tyler: "I guess I just, I feel like that's all I'll ever be now."
Dr. Singh: "How do you mean?"
Tyler: "Like maybe he was going to do something terrible, or hurt someone else...again. But maybe not, you know? And now we'll never know, and I just think that's kind of sad. Or maybe that just makes me weird or something."
Dr. Singh: "I think that makes you an empathetic person. You would've hoped he'd have the chance to change."
Tyler: "Well, no one thinks I can change."
Dr. Singh: "I think you can. I imagine your friends think you can, too."
Tyler: "I don't...I don't have any friends."
Dr. Singh: "Really? No one? I see you with friends."
―  Tyler at Therapy Thursday with Dr. Singh 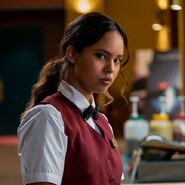 Clay and his parents

Clay looking at his phone

Tony waiting in his car

Clay talking with the social worker

Tyler at his locker

Clay and Justin in their room

Tyler looking back at Jessica

Jessica working at the Crestmont

Tyler staring at Jessica while she works

Jessica and Alex in class

Jessica and Alex at the Crestmont

Ani and Clay in robotics class

Ani kissing Tyler on his cheek

Tyler in the counsellor’s office

The first Hands Off Our Bodies meeting

Tyler at the meeting

Jessica at a H.O. meeting

Casey at a H.O. meeting

Tyler at a H.O. meeting

Monty in the locker room

Justin in the locker room

Clay finding the pictures of Bryce

Tyler and Clay at dinner

Mr. and Mrs. Down at dinner

Tyler pointing a gun at Bryce

Ani and Clay meeting up

Zach, Justin and Tony at Monet’s

Justin pointing a gun at Seth

Alex in his Dad’s car