If You're Breathing, You're a Liar

If You're Breathing, You're a Liar

If You're Breathing, You're a Liar is the second episode of third season of 13 Reasons Why. It is the twenty-eighth episode of the series overall.

This episode focuses on Zach Dempsey and Chlöe Rice as the main suspects in Bryce Walker's disappearance and the reveal of Bryce's fate.

After learning about Chlöe's pregnancy, Clay and Ani pay her a visit. Chlöe recalls how she leaned on Zach for support and that Bryce never knew.

Bryce is still missing and the whole school is on edge. Clay notices that Zach is wearing the lucky rabbit’s foot that Chloe gave him months before. He starts to suspect Zach and his motives and decides to look into the relationship between Chloe and Zach.

Flashback to eight months earlier: Chloe no longer attends Liberty High School. She decided to leave shortly after the Spring Fling when she told Jessica she was pregnant. One person Chloe claims she never told about her pregnancy was Bryce. She did, however, tell Zach, who seems to have a crush on Chloe. Zach even offers to raise her baby as his own but Chloe says she wants to get an abortion.

Zach gives Chloe money for the abortion after she tells him a horrible story about how she tried to get an abortion from a clinic that poses as an abortion provider in order to dissuade people from terminating their pregnancy.

Zach takes Chloe to a real clinic to get the abortion, but the visit turns into a scary situation when protesters attempt to stop her from entering. A “clinic escort” approaches Chloe and offers assistance, until the escort is also revealed to be a protester, who puts a bloody model of a fetus in Chloe’s hand. Chloe receives the abortion, then tells Zach she’s leaving Liberty High School.

Eight months later Zach tells Clay and Ani that Bryce did not know Chloe was pregnant or about the abortion (and that Zach helped her get it) — so that can’t be why Bryce attacked Zach on the football field. Chloe dumped Bryce months ago, and Zach claims Bryce was unaware of the deep connection between Zach and Chloe.

In another flashback, Ani consoles Bryce after his breakup with Chloe. Bryce was also struggling with other issues at the time. Bryce went to talk to some of the Hillcrest football players. He thought he was meeting with some like-minded individuals who wanted to talk about hooking up with girls, but that wasn't the case. One player appeared to get along with Bryce until suddenly he reminded Bryce that the team doesn't want to hang out with a rapist.

Later on, Bryce’s teammates shove him down the stairs, giving him cuts and bruises. Ani’s mother cleans up his wounds while Bryce’s mom accuses him of being unable to get his life together.

In the present day, Ani goes into Bryce’s room and finds a notepad. There’s still the imprint of words on it. Using a pencil to shade in the words, Ani learns that Bryce was writing a letter to Jessica.

Whatever Bryce wanted to tell Jessica, it’s unclear if he had the chance. In the present day, Tyler — who has been struggling to tell Clay something all day — takes a walk down by the river, as Ani’s voiceover notes that some people react to violence by committing violence against themselves. The scene cuts to officers pulling a body out of the river. It is then revealed that the body is Bryce, confirming his death. 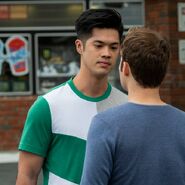 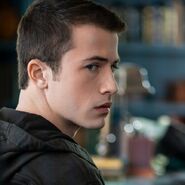 Clay waking up from a nightmare

Justin in his bed

Tyler and Clay at school

Mackenzie and Cyrus at a meeting about Tyler

Clay and Ani talking with Zach

Clay and Ani talking with Zach

Zach and Chloe at school

Clay and Ani talking with Jessica

Clay and Ani in class

Alex threatening Monty with a knife

Tyler at the counselor's office

Jessica in front of the crowd

Chlöe in her car

Chlöe and a fake abortion provider

Zach and Chloe at a clinic

Chlöe looking into the mirror

Chlöe having dinner at the Walkers

A fake clinic escort walking Chlöe to the clinic

Chlöe having an abortion

Chlöe while having an abortion

Chlöe resting in the clinic after the abortion

Tyler being knocked down

Monty and Charlie at the field

Zach and Justin at the field

Tyler editing his photos on his laptop

Tyler taking a picture of himself shirtless

Ani and Clay in a car

Ani and Clay in a car

Dean and other Hillcrest students

Bryce getting pushed down the stairs

Tyler on a bridge