13 Reasons Why Wiki
Register
Don't have an account?
Sign In
Advertisement
in: Characters, Males, Recurring Characters,
and 4 more

View source
watch 01:19
Who is Ryan Shaver?
Do you like this video?
Play Sound

Ryan Shaver is a recurring character in 13 Reasons Why. He is portrayed by Tommy Dorfman.

Ryan is the subject of Tape 8, where he was responsible for stealing a poem she wrote noting her personal problems and publishing it in the school newspaper without her consent.

Not much is known of Ryan's early life. However, he does state in The Drunk Slut that he came out as gay when he was five years old.

In the flashback, he was the only high schooler in the poetry club, but counting the new addition, Hannah Baker. He walked over to sit behind her, but she quickly dissed him about publishing the list about Hannah having the best ass in the school newspaper. She told him that she won't come back to the next meeting. Later that day, he went over to the Baker's shop and gave Hannah a notebook and told her to come to the next meeting. He read out loud his poem at the next meeting and got praise from everyone in the club, including Hannah. He later went to her house for nachos and helped Hannah write her own poem. He looked for inspiration in her old diaries and told her that she needs to be more personal. Upon hearing the poem, Ryan took the paper from the notebook and published it anonymously. Hannah went over and confronted him at Monet's, but he told her that one day she will look back at what he's done as a favor. [1]

During Ryan's testimony, he revealed the school didn't try to find the author of Hannah's poem and no one took it seriously. Sonya, the Baker's lawyer, asked him why he'd expect the school to help when he himself didn't recognize Hannah's cry for help. Ryan proceeded to tell her that that's a teacher's job and he isn't a teacher or therapist.

A flashback showed Ryan and Hannah talking about poems when Hannah received a text from Justin. Hannah admitted that she and Justin still call and text, and Ryan realized that her poems are about Justin. He told her to stop contacting him. Sonya asked Ryan to read the poems aloud and who the poems are about; Ryan claimed he doesn't know.

After Ryan read three poems, he got asked the same question and answered honestly this time. However, he lied to the question if Hannah remained in personal contact with Justin. A flashback showed Ryan walking up to Hannah and Justin talking at Monet's.

Ryan said Hannah also wrote about the lack of love but didn't publish those poems because they weren't good. He talked about Hannah being lonely and how her writing was representative of what boys did to her, but Sonya cut him off.

Ryan went to Olivia's house to apologize for letting Hannah down. Olivia wanted to ask him questions about Hannah's poems and let him in. They talked about some poems Hannah wrote about the Clubhouse, but Ryan didn't know what it's about. In a flashback, it shows how Ryan ripped out one of Hannah's poems while Hannah was getting something to eat.

When Ryan got back into his car, he received a message on a dating app, asking if he's looking for a friend. Ryan went to a bar to meet him, but no one showed up. Tyler, Cyrus and Chad were laughing at him; they made a fake dating profile and messaged him. Tony came up to him and asked if he wants to join him and Caleb, but he declined.[2]

At graduation, Ryan shamelessly flirts with Winston Williams and later states that he intends to become really famous.

Ryan is Hannah's eighth reason for why she killed herself.

After Hannah joined a poetry club, Ryan tried reaching out to her though she was still angered at him for publishing the best ass/worst ass list. Eventually however Hannah and Ryan became friendly towards one another and shared their thoughts on poetry. When Hannah wrote a personal poem and read it out loud to their group, Ryan was impressed and wanted to publish it in the school newspaper but Hannah refused. Ryan then stole her poem behind her back and published it against Hannah's wishes to the entire school (though anonymously, however people such as Courtney, Jessica and Marcus figured out it was likely Hannah's). Her poem was also read out loud in one of her classes making her feel humiliated. Hannah confronted Ryan over the theft and insulted him though he showed no remorse for his actions and claimed one day she would appreciate what he did. Ryan's theft of Hannah's poem would be the final reason for why her spirit was ultimately broken.

Ryan is shown to be a highly intelligent but also arrogant and selfish person. He seems to not care much about other's feelings as he published the list in the school newspaper of Hannah having "the best ass" which completely humiliated her and later published her poem behind her back (though anonymous) and showed no remorse over it and claimed one day she would appreciate it. He even lied to Mr. Porter about how he obtained it, claiming someone slipped it into his locker and denies knowing it was Hannah's showing that he is a complete liar.

Despite this, Ryan does not seem to be completely heartless and appears to be well aware that he did contribute to Hannah's suicide and never lies about what he did (to the others on Hannah's list at least). He appears disgusted that he and the other members on Hannah's list hide Bryce, who raped Hannah and Jessica, just to save themselves, though it appears he is willing to use him as a scapegoat to escape punishment and also attempted to get Tony to give the tapes up. In spite of this, he lashes out numerous times against Courtney, who continuously says Hannah lied on the tapes, and is disgusted at her attitude of claiming Hannah lied about Bryce and everything on the tapes. It is possible that this is due to disgust over Courtney's unwillingness to admit she is a lesbian, as he is openly gay. He also seems to believe that what he did to Hannah was minimal as he claims all he did was publish a poem and does not appear to be afraid if the truth about Hannah's death is exposed and appears to believe that he will not face any severe punishments. However, by this time Mr. Porter has already told him he is no longer allowed to publish the Lost and Found, so if he had not already lost it, his opinion might have been different.

Ryan is a tall guy with a small build, dirty blond hair and green eyes. He tends to have a very preppy clothing style that consists of buttoned-down shirts and tight jeans.

Ryan and Hannah meet at the Evergeen Poetry Club. Hannah tells him that she doesn't want to come back, but Ryan gifts het a journal and convinces her to come back. They become friends and start writing poetry together. Ryan publishes one of her personal poems, which causes people to humiliate her. Hannah confronts him about it, but Ryan doesn't regret it or apologizes, and believes Hannah should be thankful. After Hannah's death, Ryan makes a memorial edition for Hannah of the school magazine.

Tony is Ryan's ex-boyfriend. Ryan was asked out on a date by Tony to an art show at school. After their date, they walk back home. Ryan tries to kiss him, but Tony turns his head. He tells Ryan he wants to take things slowly. When a man starts calling them homophobic slurs and Tony beats him up, Ryan runs away. They stay friends. 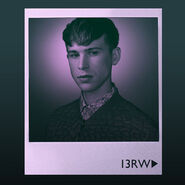 "The Box of Polaroids"