Sosie Ruth Bacon (b. March 15, 1992) is an American actress. She portrays Skye Miller in the Original Netflix Series adaptation of Jay Asher's novel Thirteen Reasons Why: 13 Reasons Why.

Sosie is the daughter of actors Kevin Bacon and Kyra Sedgwick. She was largely isolated from her parents' careers during her childhood. Bacon's first role was playing the 10-year-old Emily in the movie Loverboy, which was directed by Kevin Bacon. James Duff, producer of The Closer, was compelled by Bacon's performance in Loverboy to suggest that she play the role of Deputy Chief Brenda Leigh Johnson's niece Charlie in the fifth season of the show. Although her parents were opposed to her being involved in acting, Bacon accepted the role and appeared in four episodes alongside her mother, who played the role of Chief Johnson. She portrays Skye Miller in 13 Reasons Why. 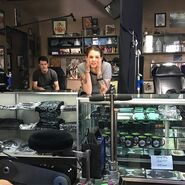