The Night We Met (Song)

The Night We Met (Song)

Clay: "Do you remember the winter dance, the one you DJ'd?"
Tony: "Sure."
Clay: "You remember that song you played, that one slow song?"
Tony: "That one slow song? Uh... I'm gonna need some more, Clay."
Clay: "It was the most amazing song. [The song plays as he flashes back to the dance]"
―  Clay asking Tony about the song before he flashes back to the Winter Formal.[src]

The Night We Met is a single from the soundtrack for both the first and second season of 13 Reasons Why, the song is performed by the band Lord Huron for their album "Strange Trails". The song played in the first season in "Tape 3, Side A" when Hannah and Clay dance together (at around 28:38). To Clay, the song became Clay and Hannah's song. It became one of the most important songs of 13 Reasons Why, and the most played song in 13 Reasons Why. The second season uses a remix of the song; it features vocals from Phoebe Bridges. It is played during Spring Fling (at 55:24) in "Bye", where everyone comforts Clay when the song starts playing. The song was also used in the teaser for the fourth season.

The song is produced by Ben Schneider, the frontman of Lord Huron. The song appeared on their album "Strange Tails" on February 9, 2015, and was released as a single on April 24, 2017 after it gained popularity thanks to its appearance on 13 Reasons Why. 13 Reasons Why's second season soundtrack includes a remix of “The Night We Met” with guest vocals from Phoebe Bridgers.

[Verse 3]
When the night was full of terrors
And your eyes were filled with tears
When you had not touched me yet
Oh, take me back to the night we met 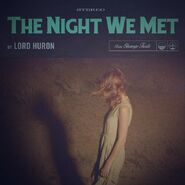