Timothy Granaderos (b. September 9, 1986) is an American actor. He portrays Montgomery de la Cruz in Netflix's 13 Reasons Why.

Before launching his acting career, he dabbled in filmmaking, working as a production assistant on the 2010 short film Committed. Timothy began acting and modeling in various commercials and prints ads, and eventually segued into television and film. He's mostly known for his part in "13 Reasons Why" and "T@gged". 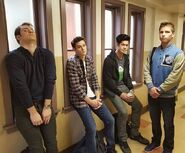