Trevor Marti Smith (b. Unknown) is an American Writer. He is a Script Co-ordinator, Writer and Writer's assistant to Brian Yorkey for Netflix's "13 Reasons Why".

Trevor Smith has written, produced, directed and starred in the short film Check Machine (2010). He also wrote, produced and directed the short film Spark (2014). He has been part of the Crew of Netflix's 13 Reasons Why for the first, second and third season as a writer, writer's assistent and script co-ordinator.. 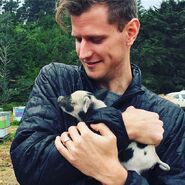