Who's excited for the release of Season 3 of Thirteen Reasons Why, which drops THIS Friday August 23? I'm here to give you the recap of Season 2, just in case you forgot exactly what happened and who is where in the story before you binge watch the next 13 episodes.

Let's start with none other than Hannah Baker, the center of the story in Season 1 and Season 2. At the end of last season, the trial favored the school and did not give Hannah any justice- however Bryce was ultimately held responsible and was sentenced to probation, giving everyone some peace to move forward. In the final episode, Bye, everyone says goodbye to Hannah at her funeral.

Now all of you are probably wondering- will Hannah be in Season 3 or not? Sadly, the answer is no. She won't be in any part of the new season. 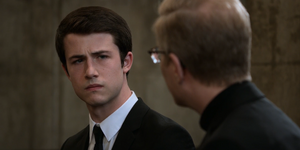 Clay had quite a lot of ups and downs in the last season- a break up with Skye, getting beat up by Monty, dealing with Hannah's trial, and seeing hallucinations of Hannah as he struggles to move on. At Hannah's funeral, he ends up telling Hannah's ghost that he loves her and is letting her go at last.

Clay has two major moments at the end of Season 2- the first was asking Justin to be his adoptive brother so that he doesn't have to go into foster care (Justin says yes!). The second major moment was talking Tyler out of committing a school shooting.

Since we're getting into the school shooting- let's talk about Tyler. Tyler is pissed. In Season 2, he was getting beat up and bullied so he decided to get some revenge, along with his (former) friend Cyrus. This revenge ended up getting him suspended and sent to a mandatory mental health program before returning to school. He goes back to school, telling everyone he's "fine", until Monty brutally assaults him. This moment is ultimately what makes Tyler snap.

He packed up assault rifles and guns and showed up at the school dance, intending to kill the bullies who never get punished. Clay manages to talk him down from the shooting and Tony drives Tyler away so the cops don't catch him.

At the very end of Season 2, Jessica decides to finally come forward to the police about her rape. She accuses Bryce and goes on record at his rape trial. Bryce gets convicted and Jessica gets some peace, allowing her to start to move forward and heal.

Jessica starts dating Alex, who has been there for her the entire season. They kiss at the school dance. Jessica still has major sexual tension with Justin, her ex, and it's obvious they still care about each other. They secretly hook up at the dance in a locker room. Drama! 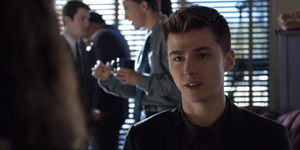 Alex spends most of Season 2 trying to recover from shooting himself at the end of Season 1, through rehabilitation sessions with Zach. Alex also spends a lot of time with Jessica as they try to get justice for Hannah in the trial.

He and Jessica start to date in the last episode of Season 2, although there was MAJOR sexual tension between him and Zach throughout last season and I think there could be something between the two of them, whether they know it or not. 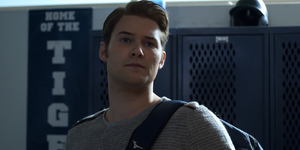 Bryce has reliably been our villain for seasons 1 and 2. He was finally brought to justice at the end of Season 2, after Hannah's trial revealed how he sexually assaulted her. Jessica also came forward to accuse Bryce. At the trial, he was only sentenced to three months because the judge doesn't want to "do any more damage" to Bryce. Seriously?

Chlöe has stood by Bryce and tells him that she loves him. (She also reveals to Jessica that she is pregnant, presumably with Bryce's baby).

Bryce is alive at the end of Season 2, but the Season 3 trailer shows that someone shoots and kills him. Who killed Bryce Walker? We'll have to wait to see! 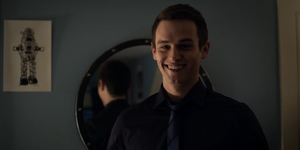 Justin has been trying to make amends this season. He defended Hannah's honor and turned on his "BFF" Bryce at the trial to give Hannah some justice. Since Justin went on record at the trial about witnessing the assault, he was sentenced to six months probation. Clay and his parents offered to adopt Justin so that he doesn't have to go into foster care. Justin tearfully accepted the offer!

Justin also is still not over Jessica. He hooks up with her at the school dance, although their current status is still unclear. He is also still not over his heroin addiction, and is seen shooting up at the Jensens at the end of Season 2.

Tony is in love with a very cute guy named Caleb. He also helps save Tyler after his attempted school shooting. Olivia Baker is finally ready to move forward after Hannah's death. She tells Ryan she wants to do some traveling! She and Hannah's dad, Andrew, are still no longer together.

Chlöe Rice is pregnant, as we mentioned above. Will she have the baby after Bryce's death? Monty is still a bully, who brutally attacks Tyler at the end of Season 2, and is still desperate to defend Bryce.

Mr. Porter got fired and is out of the picture, Mackenzie found a new man, Cyrus is friendly to Tyler but no longer his friend, Courtney is now openly gay and brings her girlfriend to the dance, and Zach is just the best.

So that about covers Season 2 before you watch Season 3 of Thirteen Reasons Why! Get ready by watching the trailer below:

Retrieved from "https://13reasonswhy.fandom.com/wiki/User_blog:Asnow89/13_Reasons_Why_Season_Two_Recap?oldid=34331"
Community content is available under CC-BY-SA unless otherwise noted.