You Can Tell the Heart of a Man by How He Grieves is the sixth episode of the third season of 13 Reasons Why. It is the thirty-second episode of the series overall.

This episode focuses on Tony Padilla and Barry Walker as the main suspects in Bryce Walker's murder.

Tony Padilla gets taken in for questioning at the police station. Deputy Standall asks him how well he knew Bryce Walker and whether or not he'll be sad because today is Bryce's funeral. Tony says he really didn’t know Bryce well and that he won't be particularly sad because he's suffered "far worse".

At the funeral, Zach Dempsey and Justin Foley aren’t sure how they can grieve their former friend after every awful thing he did and feel guilty that they are sad. Nora Walker, Bryce's Mom, also appears to be conflicted on how to feel. Barry Walker, Bryce's Dad, uses the funeral as a social opportunity to greet guests, smiling. He appears to not feel any emotion over his sons death, so Clay becomes suspicious of him, but Ani points out that being a bad father doesn't make him Bryce's murderer.

In a flashback, we see how Barry treated the family. He left Nora and Bryce and immediately bought a house down the street with his new girlfriend. He didn't care about having any continued contact with Bryce or his ex-wife. Bryce even asks him to play golf sometime, to which his dad affirms to although showing no enthusiasm or intention of following through.

Bryce then breaks into his father’s actual house and messes up the place, leading Barry to have an intense fight with his son. Bryce refuses to pay for any damages, and reminds his father of Caitlin. Caitlin is revealed to be his 12-year-old daughter, Bryce's half-sister, from a secret affair. Nora calms Bryce down and tells him that they have to move on and that they must be done being controlled by Barry.

In another flashback, Tony’s family was taken by ICE (Immigration and Customs Enforcement). He sold his car to Bryce to pay for lawyers to help them, though it wasn’t enough and ultimately his family was deported. Clay is upset that Tony didn’t confide in him, and Tony says it’s because Clay could never understand what he’s going through. Clay understands and realizes it’s true, as his family could never face the threat of deportation. Grateful that it could never happen and knowing how privileged he is, he goes home and hugs his Mom and Dad, before suggesting that they make some space in their collection of family photo for photos of Justin, since he's family to them, on the fireplace mantle.

Jessica’s activist group shows up at Bryce's funeral and they stand up in the middle of Nora’s speech to call him a rapist. Barry demands the women are arrested and grabs one of the women to shout in their face. A majority of the people who attended the funeral all go to Mrs. Walkers' house after the funeral.

The cops examine the security footage from the Walker house to look for more clues about Bryce's murder. They find footage of Clay threatening Bryce with a gun, from "Bryce and Chloe"/"The Box of Polaroids", which makes Clay look very guilty.

On this one, Clay and Ani suspected different people. Ani, and the cops, suspected Tony Padilla and Clay refused to believe that Tony could have killed Bryce and tried to find another suspect, he suspected Bryce's father, Barry Walker and Ani gave him information that made Ani question Barry too. Clay later went with Ani and investigated Tony.

Nora: "They promised four uniformed deputies and the sheriff is here."
Amara Josephine: " They don't think children would disrupt a funeral?"
Nora: "They found flyers at the school."
Amara Josephine: " But all these people have come to pay their respects. "
Nora: "I'm not sure that's why they're all here. I can't help but think his killer might be one of them."
―  Nora Walker and Amara Josephine at Bryce's funeral

Charlie: "He was always really nice to me, even when I was a freshman. I guess he changed."
Justin: "No, the same guy who was nice to you is the same guy who someone wanted dead."
―  Charlie and Justin talking about Bryce 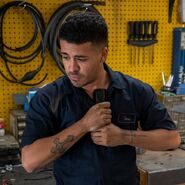 Chlöe, Zach and his Mom at Bryce's funeral

The Jensens arriving at the funeral

Mr. Walker arriving at the funeral

Bryce introducing himself to his Dad's girlfriend

Bryce and his Mom

Mr. Chatham screaming at his daughter

Mr. Walker talking to Ani and her Mom

Mr. Walker screaming at the protestors

Bryce and his Dad arguing

Bryce and his parents

Clay, Ani and her Mom

Clay and Justin bumping into each other

Clay and Ani with Tony's car

Jessica, Charlie and Justin at the Crestmont

Tyler helping Alex up after knocking him down

Tony and his little sister

Footage of Clay pointing a gun at Bryce